I suck at updating my LJ these days. It's been a year.... And Facebook is terribly addictive. But I'll get better.

The semifinals for the swedish eurovision song contest are over, and as usual, the best songs have all been eliminated. The very best one was eliminated today. I love modernized folk music, and previous years we've had great performers, such as Nordman, Roger Pontare and Sarek, all who normally never go on to compete in the european contest. I'm equally disappointed every year. Although, Roger Pontare, whom I've met in real life and has one of the most powerful voices I've ever heard, did win ten years ago and performed a translated version of his song, called "Spirits are calling my name". It did okay in europe, but deeply ethnic songs don't usually go all the way. Still, I'll always be sad that Nordman and Sarek never got a chance to represent our country. They are so very swedish. Modernized folk music, with all its fiddles and flutes and traditional singing, it just strikes something old-fashioned and patriotic in me.

This years contribution might not feature one of the greatest voices in our country, but it strikes that same chord. It made me cry the first time I heard it. That's how deeply rooted this style of music is in my blood. I'm sad they didn't make it, but I knew they wouldn't. People only think of what the rest of europe might vote for, not what they want representing us. It doesn't feel like it's worth watching the swedish final now.

Having a bad day in general, so am amusing myself on the interwebs. 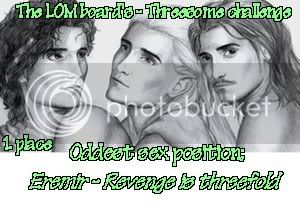 Title: A Waterproof Arrangement
Author: Eremir
Pairings: Thranduil/Glorfindel
Rating: NC17
Wordcount: ~7,900
Summary: Glorfindel is left to baby-sit a very grumpy king. What happens when his patience runs out?
Warnings: Smut, PWP
Disclaimer: All characters, names and places belong to Tolkien; I’m merely having my way with them and will bring them back alive and unspoiled.
Notes: Written for the Library of Moria Water Challenge, April 2005.
Beta’d by the insatiable

I'm working on a fic masterlist, which means I need to post some old stuff that I've previously only had on Library of Moria. I'm starting with an old favorite from 2004.


Title: Forbidden Fruit
Author: Eremir
Pairings: Erestor/Glorfindel
Rating: NC17
Wordcount: ~13,000
Summary: Erestor has an obsession. An obsession that threatens to undo him. A secret only Elrond knows. Will Elrond be able to save Erestor when his animal urges are ultimately unleashed?
Warnings: Smut, kink, messiness, and general weirdness. Minor angst and a little fluff. Just the right combination. ;)
Notes: Written for the Library of Moria ‘Secret Fetish’-challenge, November 2004. 3rd place winner in the "Naughty" category at the My Precious Awards.

-List 5 celebrities you would have sex with without even asking questions.
-Put all of them IN ORDER of your lust for them (5 - 1, 1 is the hottest).
-Say which movie/show/thing it was that hooked you.
-Supply photos for said people.